The Honey Run Covered Bridge will be re-dedicated by the Native Daughters of the Golden West (NDGW) on Sunday, August 27 at 10am the Honey Run Covered Bridge Park at 1670 Honey Run Road in Butte Creek Canyon. The Bridge was originally dedicated as a historical monument by the NDGW with the erection date of 1894. However, after researching through county engineering, building and bid records, it has been determined that the Honey Run Bridge was built as the Carr Hill Bridge in 1886 and was open to the public on January 1887, 130 years ago. Legend has it that the bridge was washed away by a flood in 1894 and rebuilt, however, no official county records nor newspaper accounts confirmed this legend. The Bridge flooring was damaged and when replacing the boards in 1901, it was decided to completely cover the Bridge at that time. The Bridge was used until a panel truck destroyed the eastern span in 1965.
On August 27, a new plaque and monument will be unveiled at the western entrance to the bridge with the correct dates and other historical information. The public is invited and refreshments will be served. The gates will open at 9:30am and the event will last until Noon.
For further information call Robert at 588-4541 or e-mail Deana Glatz of the (NDGW) at dmglatz@hotmail.com or Melissa Ramsey at em_runge@sbcglobal.net 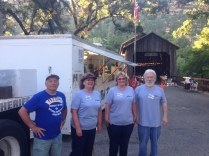 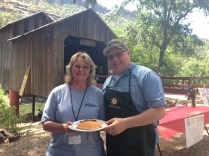 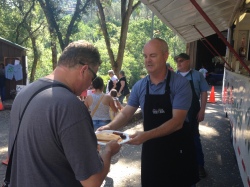